Bion’s patented technology utilizes a combination of mechanical, biological, and thermal processes to provide comprehensive and cost-effective treatment of livestock waste, while recovering valuable assets from the waste stream, including renewable energy, nutrients and clean water. The platform provides a level of monitoring, control and verification similar to a municipal wastewater treatment plant.

Nutrients recovered from the waste stream become the basis for co-products, like fertilizer and potentially feed products. In May 2020 Bion received an OMRI Listing (Organic Materials Review Institute) for the first USDA National Organic Program-compliant fertilizer product produced by Bion’s third generation (3G) technology. Biogas produced in the 3G platform can qualify for substantial renewable energy credits under the federal RFS, as well as low carbon fuel credits available on the west coast. Water is available for a number of purposes, including irrigation, aquifer recharge or reuse with additional treatment. Recovering these assets improves overall farm-sustainability and the coproduct revenues help offset both operating and technology adoption costs.

Because the livestock waste is so concentrated, Bion can achieve verified nutrient reductions at a fraction of the cost of traditional alternatives, such as municipal wastewater treatment or other point source treatment, conservation practices and storm water projects. Unlike most agricultural or other non-point source reductions, Bion’s can be measured and quantified, just like a point source. US EPA allows states to use these low cost agriculture ‘credits’ to offset federal requirements to reduce nutrients.

Bion’s systems substantially reduce air emissions, including ammonia and greenhouse gases. Livestock waste has been identified as one of the largest sources of ammonia in the U.S. As a precursor to PM2.5 (small inhalable particulate matter), ammonia poses a health risk to humans and promotes respiratory distress in livestock that reduces production and increases antibiotic use. Airborne ammonia also transports reactive nitrogen over wide areas where it reenters the ecosystem in a process known as atmospheric deposition. Nitrogen from ammonia has been linked to increasing groundwater contamination from nitrates in several Pennsylvania and Wisconsin counties. Livestock production is also recognized as a significant source of greenhouse gases on the planet.

Bion’s 2nd generation (2G) treatment solutions were proven in commercial operations and accepted by EPA, USDA and various state regulatory agencies. Bion’s Kreider Dairy system was granted a full water quality management permit in 2013, and the nutrient credits it produced were verified under a Pennsylvania DEP-approved verification plan. In December 2014, the 2G technology was reviewed and qualified under the USDA Technical Assessment program, the most rigorous of all renewable energy project grant/subsidy review programs overseen by USDA.

Beginning in September 2014, Bion began filing patents on its third generation technology that is designed to recover substantially more value from the waste stream than the 2G platform, while maintaining or enhancing treatment capabilities.

The 3G platform uses anaerobic digestion to produce biogas (methane). The residual digestate contains dissolved ammonium bicarbonate, which is the focus of Bion’s patented ammonia recovery system. The residual solids, another energy and nutrient source, contain the remainder of the nitrogen, phosphorus and micronutrients. All processes are monitored and third-party validated, as with Bion’s 2G platform, so that renewable energy and nutrient credits, along with branding data, are generated and verified.

The original 2014 patent application on the 3G platform was recently reinstated. In September 2015, a second patent was filed that was issued in October 2018, becoming the first 3G patent issued. In July 2017, the 2015 filing was continued with its protections broadened; in January 2020 Bion received a Notice of Allowance on that filing. In October 2020, Bion was granted new protections that significantly strengthened its IP portfolio. Additional patent filings are anticipated.

A number of small-scale 3G pilot studies were completed throughout 2016, 2017 and 2018. A final small scale pilot was completed in 2019, which successfully produced material for an initial application to OMRI (Organic Materials Review Institute) that was granted in May 2020. In February 2021, Bion completed the core optimization trials on the 3G technology platform, and made a second application to OMRI for its dry (solid) ‘pure’ ammonium bicarbonate product, AD Nitrogen. 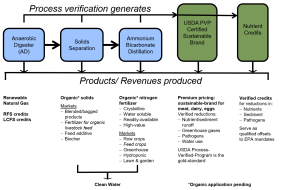 Bion 2G systems removed up to 95% of the nutrients in the effluent, reduced greenhouse gases by 90%, and virtually eliminated ammonia emissions, as well as pathogens in the waste stream. Bion’s 3G system performance will exceed that performance and provide significantly higher coproduct values. The system can be configured in a variety of ways (based on the needs and economics of the location) to separate and aggregate the various components of the waste stream to produce renewable energy and byproducts, such as organic fertilizer products and soil amendments. 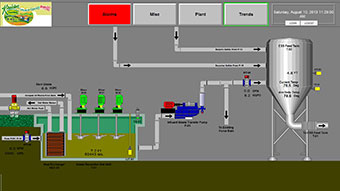 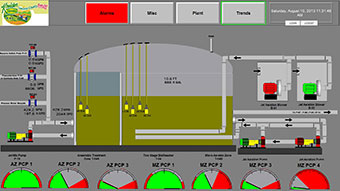 Screenshots from Bion’s SCADA system demonstrate the real-time monitoring and control that enables the certification of verified credits.

Bion’s 2G platform is protected by seven U.S. patents, and six international patents, with applications pending in the EU, New Zealand, Mexico, Brazil, Argentina and Australia. There is no other known cost-effective technology that provides Bion’s level of treatment of wet livestock waste.

At the front end of the system, an industrial screw press separates the “coarse solids”, consisting mostly of undigested cellulosic material.

The effluent is then pumped to a bioreactor, where Bion’s patented biological processes convert the nitrogen into a stable, usable form and harmless N2 gas.

The nitrogen-rich “fine solids” are then separated out mechanically and are used to produce organic fertilizer and animal feed products. The now clean water can be used for irrigation, aquifer recharge or, with further treatment, drinking water for the herd.

The Notice refers to the certification of nutrient credits generated from Bion’s comprehensive technology as previously discussed in the Company’s press release dated Feb 27, 2008.