It is now generally accepted that U.S. livestock production contributes approximately 4.2 percent of the Nation’s greenhouse gas emissions, in the form of methane and oxides of nitrogen (NOX). Globally, livestock produce approximately 14.5 percent greenhouse emissions. The relative impacts of methane vs CO2 production are still hotly debated. However, the fact is, animal protein production is a significant contributor to climate change, both in the world and the U.S. There is room to improve livestock’s carbon footprint, including changes in feed, genetics and especially waste management.

Excess nutrients – nitrogen and phosphorus – lead to toxic algae blooms and dead zones in our lakes and coastal waters, poor water quality in our rivers and streams, and groundwater contamination. Severe impacts to water quality can be seen in most major U.S. watersheds, notably the Chesapeake Bay, Great Lakes and the Mississippi River Basin/Gulf of Mexico. 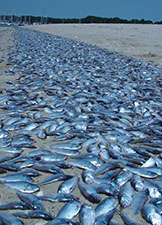 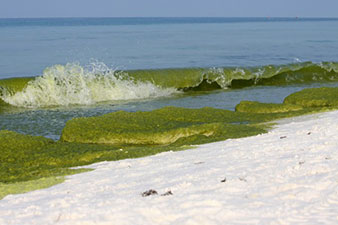 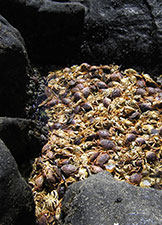 Nutrients come from a multitude of sources in two broad categories: point sources, with a definable discharge or emission, which are closely regulated, such as municipal sewage treatment, power plants and industrial facilities; and more-diffuse non-point sources, which are subject to much less (if any) regulation, such as storm water runoff and agriculture. Learn more about nutrients on the EPA’s website.

Nine million dairy cows, 90 million beef cattle, 60 million swine and billions of poultry in the U.S. produce more than 100 times more organic waste (and nutrients) than humans; but where human waste makes its way to a septic tank or sewage treatment plant, livestock waste is usually spread untreated on the ground for its fertilizer value. 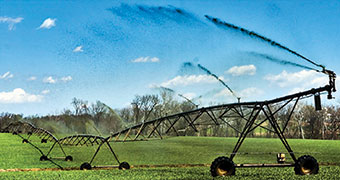 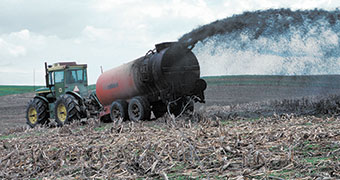 These nutrients often overwhelm the crops’ and surrounding environment’s ability to absorb them. Excess nutrients runoff to contaminate local aquifers, lakes and rivers, as well as downstream lakes and coastal estuaries. Under the right conditions, algae blooms can form that are more frequently toxic, such as the 2014 bloom in Lake Erie that left the citizens of Toledo without water for two days. When algae blooms ultimately die off, oxygen in the water is depleted and dead zones can form. Since 1985, a dead zone has formed in the Gulf of Mexico, fueled by nutrient-laden runoff from the Mississippi River. The dead zone averages over 5,000 square miles; the largest on record was 8,776 square miles in 2017.

Runoff from livestock waste has been identified as one of the largest sources of excess nutrients in most major watersheds, including the Great Lakes and the Mississippi River Basin. More than half of the nutrient impacts from livestock come from ammonia emissions from the waste. The nitrogen in this ammonia is highly-reactive and -mobile. When it comes back down (atmospheric deposition), it ‘rains’ everywhere – forests and fields, rivers and lakes, parking lots and rooftops – where it is then picked up in storm or snowmelt runoff.

According to the US EPA’s National Rivers and Streams Assessment 2008-2009, over 55 percent of our nations rivers and streams are in poor biological health, the most widespread problem being nitrogen and phosphorus. Weed-choked waterways, fish kills, loss of aquatic insects that are a critical part of the food chain, and loss of overall biodiversity are all symptoms of excess nutrients. US EPA considers excess nutrients “one of America’s most widespread, costly and challenging environmental problems”. A 2015 Veolia and International Food and Policy Research report draws a similar conclusion for the world.

The Chesapeake Bay is one of the most nutrient-polluted estuaries in the United States, mostly due to nitrogen, phosphorus and sediment runoff from agriculture. The Bay has suffered steep declines of oyster, crab and fish populations, reduced visibility and underwater grasses, and annual dead zones.

The Chesapeake is also one of the most closely monitored and studied watersheds in the country. In 2009, after many years of failed voluntary programs, the US EPA implemented watershed-wide regulation (TMDL – total maximum daily load) under Executive Order, requiring substantial reductions of nitrogen, phosphorus and sediment from the six Bay states and Washington, D.C. And it is working. While progress has been painfully slow, it is clear that if the nutrient load is reduced, the watershed will improve.

Environmental and economic studies of the Chesapeake Bay demonstrate that a successful and affordable nutrient control strategy must address agriculture and livestock waste, as it must in most nutrient-impaired watersheds in the U.S. The strategies and policies now being developed to restore water quality in the Chesapeake Bay will create a model that can be adopted by the more than 30 states facing tremendous costs to reduce excess nutrients.

In August 2014, the city of Toledo, Ohio, was unable to deliver drinking water for five days when a toxic algal bloom (microcystin), fueled by nutrient-laden runoff, developed around the intakes of their drinking water plant on Lake Erie. (NASA)

Every year, from the mouth of the Mississippi River, a dead zone forms in the Gulf of Mexico, caused by the decomposition of algal blooms created by the spring runoff. Averaging 6,000 square miles, marine life that depends on oxygen must flee or die. (NASA)